Out on the pitch, they finally can feel like themselves.

In addition to the sheer joy that football brings them, Mara Gomez and Marcos Rojo have the extra satisfaction of knowing that after a long and difficult journey, they are blazing a trail for transgender players in Argentina.

Tall, slim and with her hair tied back in a ponytail, Gomez plays for the team of Villa San Carlos in La Plata, 60 kilometers (40 miles) south of Buenos Aires.

At 23, she aims to become the first transgender player in the new women’s professional league in her native country.

“I suffered a lot from discrimination, exclusion, verbal abuse in the street and in school. Football was like therapy for me,” Gomez told AFP.

She started playing at 15, encouraged by neighbors.

In the women’s league in La Plata, Gomez distinguished herself as a leading goal scorer in the past two seasons.

That prompted Villa San Carlos, in last place in the women’s professional league, to seek to recruit her.

“Unlike what people and the media were thinking, she isn’t that strong. I have a number of girls who are stronger and even though she’s fast, I have girls who are faster,” he noted.

But Vitale added: “She’s smart and learns quickly. And she gets goals, which is what we were lacking.”

The club is in the process of submitting its application to the Argentine Football Association to sign Gomez up, once the current coronavirus lockdown

Mike Tyson getting back into shape, willing to fight again for charity

Mike Tyson is open to doing an exhibition fight for charity.

Tyson, a former undisputed heavyweight boxing champion, hung up his gloves in 2005 after a roller coaster career that saw him become the youngest champion in the division.

“I’ve been hitting the mitts for the last week. That’s been tough, my body is really jacked up and really sore from hitting the mitts. I’ve been working out, I’ve been trying to get in the ring, I think I’m going to box some exhibitions and get in shape,” Tyson said in the expediTIously podcast by rapper T.I. recently as posted on BoxingScene.com.

“I want to go to the gym and get in shape to be able to box three or four-round exhibitions for some charities and stuff. Some charity exhibitions, make some money, help some homeless and drug-affected (expletive) like me.”

Apart from doing the mitts, the 53-year-old Tyson said he’s also been doing a lot of work on his conditioning.

“I do two hours on cardio, I do the bike and the treadmill for an hour, then I do some light weights, 300, 250 reps. Then I start my day with the boxing thing, I go in there and hit the mitts, 30 minutes, 25 minutes, start getting in better condition. I’m starting to put those combinations together. I’m in pain, I feel like three guys kicked the s**t out of me.”

Tyson started his career with 37 consecutive wins before losing to Buster Douglas in one of the most stunning upsets in sports history in 1990.

Football has been put on pause amid the Coronavirus pandemic but while we wait eagerly for its return, we can take stock of the season so far.

This is an opportunity to focus on some of the new players who have burst onto the scene this term.

Here, we list the Bundesliga’s five breakthrough stars of this season, only considering players who have made a maximum of 10 appearances in one of Europe’s top five leagues.

An obvious place to start is with the ultimate breakthrough star this season – Alphonso Davies. As far as left-backs go, David Alaba was pretty close to perfection but Davies’ exceptional talent meant the Austrian was forced to move centrally to accommodate the youngster.

The Canadian has been competent defensively and devastating in attack, registering a league-high three dribbles per game. He also ranks fourth for progressive runs. Davies has made 21 league appearances this term and has become a mainstay in Bayern Munich’s back line.

Given the Canada international’s meteoric rise and with several other clubs interested in acquiring him, it’s no surprise that after only his first season in the senior team, the Bavarians have already handed Davies a new contract until 2025. 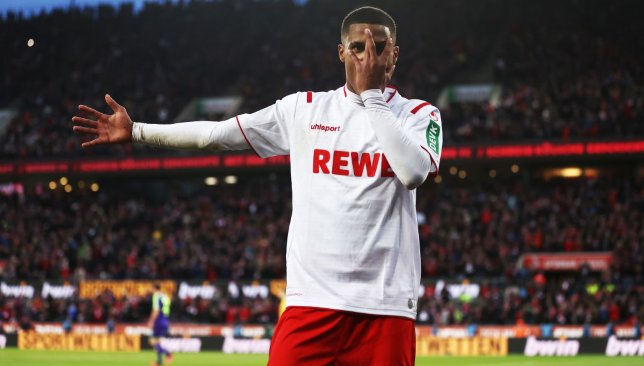 Capable of playing at left-back, Ismail Jakobs has largely been used further forward as a winger during his first season in Paderborn’s senior side.

He began the campaign injured but has been a regular ever since his debut back in November, bagging two goals and an assist along the way. Of course, playing for the relegation favourites rooted to the bottom of the table in your maiden season can’t be easy but Jakobs has held his own and impressed under the circumstances.

With plenty of pace and power in his repertoire, the 20-year-old also offers