MANILA, Philippines—Top Rank CEO Bob Arum has started laying out the groundwork for Top Rank’s future events as the sports world prepares for the new normal amid the COVID-19 pandemic.

Top Rank plans to stage its cards in the United States in early June and steadily through the next few months without fans in attendance, like what UFC did in its first fight night since the pandemic broke.

Arum said UFC 249 “wasn’t bad” first step as sports events around the world try to return to regular programming by following precautionary measures against the disease.

But Ronaldo “Jacare” Souza tested positive for COVID-19 along with two of his cornermen, prompting UFC to cancel his scheduled fight.

“What happened on Saturday (with Souza’s COVID-positive test being learned the day before the fight night) will never happen on our shows,” said Arum in the report on Boxingscene.com. “It will be detected before they even get in the facility.”

“That has to be done and will be done. We’re talking about four fights to start out, the fewer the fights you have, the better you can control things.”

Arum, though, praised UFC for what it has done with the 249 pay-per-view.

MANILA, Philippines—Team Lakay is undoubtedly one of the strongest stables in Asia, having produced eight World champions across different promotions as well as other accolades in other disciplines.

Its patriarch Mark Sangiao is seen as an indomitable father figure in the Asian mixed martial arts scene, but credit still goes to the mothers of the Team Lakay fighters for molding them into who they are today.

Eduard Folayang, a multi-time ONE World lightweight champion, is the stable’s oldest fighter at 35 and is seen as the group’s “manong” and mentor apart from Sangiao.

As the de facto captain, Folayang has a great influence on the team and he credits his mother for his upbringing and his skills as a leader.

“We need to be reminded of the sacrifices and hardships our parents went through to take care of us, especially our mothers,” said Folayang, who is just six years the junior of Sangiao. “My mother is very important because she is the one who molded discipline in me and taught me the principles to live by. She has been my inspiration to keep going, even in my darkest times.”

For Danny Kingad, having his mother by his side growing up made him the strong fighter that he ultimately came to be.

Losing his father at a young age, Kingad had to fight through poverty but he had his mother guiding him every step of the way that’s why every day for him is Mother’s Day.

“For me, it is always Mother’s Day. Nothing can beat a mother’s love. Being a mom is not simple. There’s a lot of hardship and sacrifice. She’s very important to me because she gave me life. She took care of me when I was young, corrected me and taught

The 2019/20 Arabian Gulf League season isn’t officially concluded but given the suspension because of coronavirus until August, at the earliest, its continuation – should it resume – would almost feel like a new mini-campaign to check off the remaining seven fixtures.

As such, it seems only fair to acknowledge the players who have performed admirably during the course of the normal campaign.

Here’s what our Team of the Season, with help from Opta and Wyscout, looks like:

It’s been a long wait for Al Senani to establish himself as a bona fide No1.

But a second season between the sticks at Dhafra has shown why the 30-year-old is much more than mere back-up to Ali Khaseif at Al Jazira. Statistics show that the skipper has faced a tournament-high 103 attempts, also leads the way with 79 saves.

If he had shown any weakness, the Western Knights would be nowhere near their current sixth spot.

Juma, 21, had flirted with the Al Ain first team before. But 2019/20 was the time when he became an undisputed starter for the UAE’s most-decorated club.

A dribble-success rate of 60.9 per cent points to his attacking proficiency, while his 96th-minute winner on the opening day versus Ittihad Kalba is unforgettable. These achievements make the UAE national side’s continued ambivalence towards him ever-more perplexing. 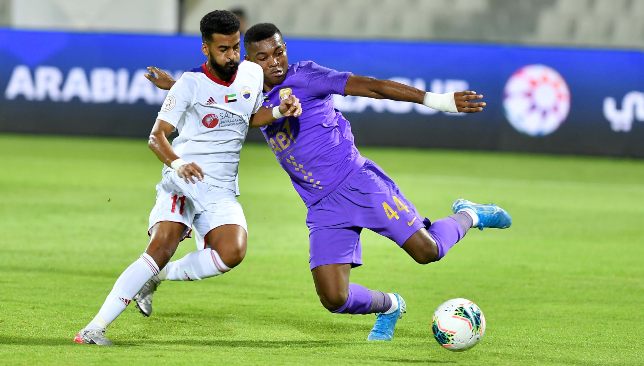 Marzooq has undertaken an intrinsic role in the league’s best defence.

The 31-year-old competes for every ball, whether on the floor or in the air. His success even saw a run of starts for the UAE at the winter’s Gulf Cup,