ONE: Adiwang eyes title but prefers not to face teammate Pacio

MANILA, Philippines — With both ONE strawweight world champion Joshua Pacio and the fast-rising Lito Adiwang racking up one victory after another, it seems inevitable at this point that the two Team Lakay warriors would eventually cross paths.

Adiwang is fully aware of it, but if he has it his way, he prefers a different scenario where a fight with Pacio won’t be necessary.

“My personal goal is to be known as one of the best fighters in the division. Of course, I want to eventually compete for a world title. It’s every athlete’s dream to become a world champion,” said Adiwang.

“While it will ultimately depend on ONE Championship, I still prefer not to face Joshua Pacio as much as possible. I want to avoid that.”

For Adiwang, taking on the other big names in the division first makes much more sense as he continues to work his way to the top.

“Instead, I want the top guys in the division. Dejdamrong Sor Amnuaysirichoke, Yoshitaka Naito, Alex Silva, Yosuke Saruta. These are all great matchups for me and challenges I’m willing to face. I just want to face the best and prove myself.”

The 26-year-old Adiwang is undefeated in his last seven fights, which include two stoppage wins over Senzo Ikeda and Pongsiri Mitsatit in his first two bouts as part of ONE Championship’s main roster.

Determined to prove his worth, he certainly has no plans of slowing down.

“My plan is to keep taking on anyone they put in front of me and beat them. I’ll take any fight, no matter how short the notice. I’m always ready, always training, and always ready for action,” he said.

A medical worker holds a sample as she tests a key worker for the novel coronavirus (COVID-19) at a drive-in testing center at Glasgow Airport on April 29, 2020. Image: Andrew Milligan/POOL/AFP

Celebrities continue to question the lack of mass testing in the country amid two months of community quarantines in the country.

(We’re increasing our testing capacity. We’re aiming to reach 30,000. But in terms of mass testing like what China is doing in Wuhan, testing all 11 million of its citizens there, we have no such program like that yet, and we leave it to the private sector.)

Personalities such Carlo Aquino, Frankie Pangilinan and Alex Diaz were among those who reacted to the statement from Roque. 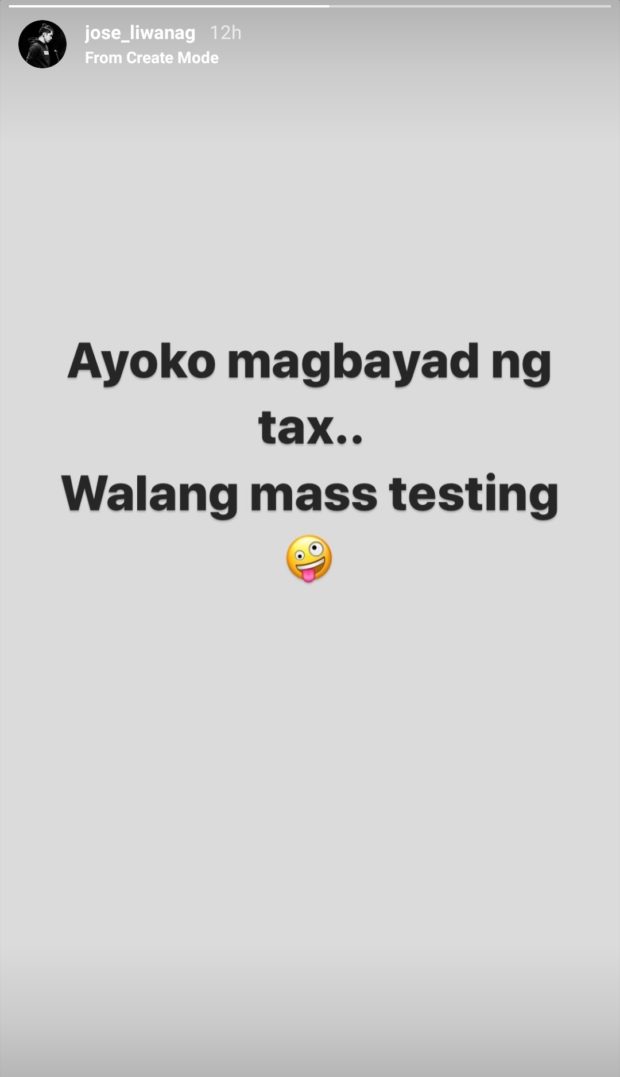 “I am at a loss for words. Does this government even care for its people?! Mass testing is the only way we can move forward. No programs? Zero after these 2 months of ECQ?” model Kelly Misa wondered.

LeBron James: “Definitely not giving up on the season”

LeBron James reiterated Monday that he is hopeful the NBA season can resume, with the caveat that the health and well-being of players won’t be jeopardized by a return to play.

The Los Angeles Lakers star, speaking on the Uninterrupted platform’s “WRTS: After Party” show that was released Monday, said it remains his wish that the season comes back “sooner than later.” The NBA suspended the season on March 11 because of the coronavirus pandemic, and two unidentified members of the Lakers were among the league’s players who subsequently tested positive for the virus.

“Definitely not giving up on the season,” James said. “Not only myself and my teammates, the Lakers organization, we want to play. There’s a lot of players that I know personally that want to play. And obviously, we don’t ever want to jeopardize the health of any of our players or any of the players’ families and so on and so on.

“This is a pandemic that we have no idea (about). We can’t control it,” James added.

James was among a group of some of the league’s highest-paid players, National Basketball Players Association president Chris Paul of the Oklahoma City Thunder also part of the group, who met last week to talk about the season. Those players affirmed to one another on that call that they would like to see the season resume.

NBA Commissioner Adam Silver told players’ union members on May 8 that he was hoping to make some sort of decision about the future of the season within no more than a four-week window. By that timeframe, Silver and the NBA would therefore like to chart some course of action by June 5.

As of Monday, just over half of the league’s 30 franchises had reopened their practice facilities for voluntary workouts.