Heart Evangelista on plastic surgery claims: ’My eyes nose etc were made by God’

Heart Evangelista clarified that she has never modified any part of her face after a fan asked her if she had undergone plastic surgery.

The actress answered the question during a Q&A session with her followers on her Instagram Stories last Sunday, Oct. 25.

“Never done anything to my face,” she said. “My eyes and nose etc were made by God. I swear.” 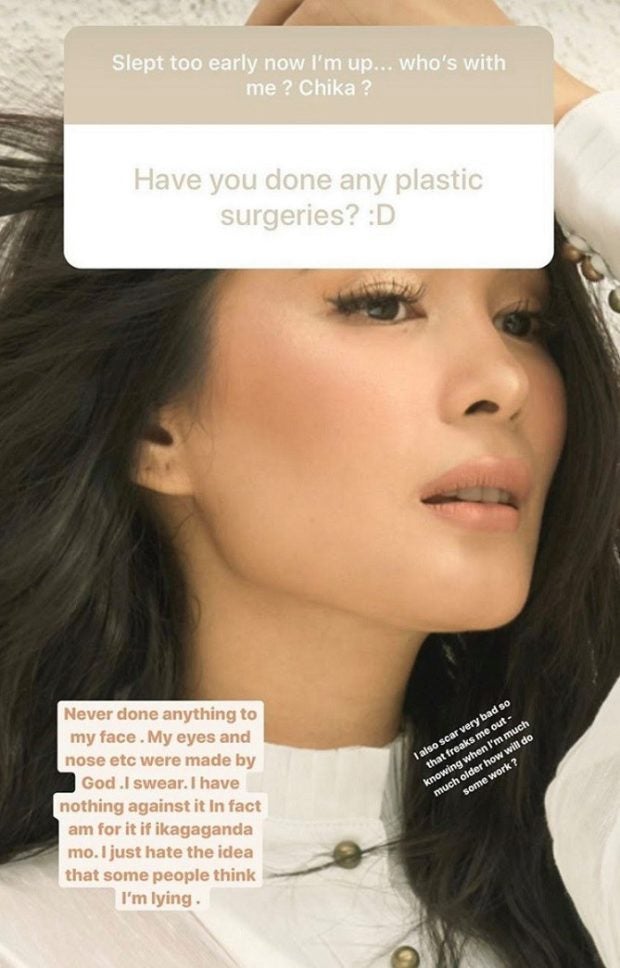 Evangelista also said that she has nothing against cosmetic surgery. She actually supports it if it makes one feel more beautiful.

“I just hate the idea that some people think I’m lying,” she added.

“I also scar very bad so that freaks me out — knowing when I’m much older how will [it] do some work,” Evangelista stated.

Along with her acting and modeling career, Evangelist recently released a song that she recorded back in 2005. She revealed that she wrote the song, “Breathe You,” when she was just 21 years old and was still figuring out what to do with her life.

“I just knew that I was extremely happy and free and I’m seeing the world slowly,” she told GMA News Online. “I remember recording that song because I really had good people around me during the time.”  /ra

Yes Christian Coleman is a clean athlete, but is his reputation after missed doping tests?

Thirteen months ago Christian Coleman powered to 100m World Championship glory in Doha, shrugging off the missed doping test controversy which marred his build-up to the games.

Victory would cement his status as the man to beat at the Tokyo Olympics and move him to the front of the queue as Athletic’s new A-List superstar.

However, despite receiving generous plaudits for clocking 9.76 secs in Qatar, some, like legendary sprint king Michael Johnson, suggested his three missed doping tests prevented him from becoming the face of the sport.

A cloud of controversy still hung over his name, but Coleman insisted he had not been careless despite missing one test and two whereabouts failures in 12 months.

“I haven’t been careless. Everyone in this room has not been perfect. I am just a young black man living my dream, people are trying to smear my reputation,” he said after his Doha success.

“It is what it is, but I’ll just keep doing what I’ve been doing and focus on me. Now I’m a world champion and that’s something that nobody can ever take away from me.”

In all aspects of life, you can only run away for so long before being caught.

On Tuesday, a disciplinary panel banned the Atlanta native for two-years because of the three violations of doping control rules. He will miss next summer’s Olympics in Tokyo.

Key to the ban was an incident on December 9 when Coleman claimed to be out Christmas shopping near his home in Lexington, Kentucky during his one-hour testing window that night.

The AIU reviewed receipts from Coleman’s shopping and ruled it would have been “simply impossible” for him, given the distances involved, to buy food from Chipotle, return home and leave again within his alleged timeframe.

The AIU said: “We regret

New-look line-ups could receive their first outings this weekend when the 2020/21 Saudi Professional League resumes after the transfer window’s close.

Floundering Al Ittihad made the grandest addition with a shock loan move for towering Egypt and West Bromwich Albion centre-back Ahmed Hegazy, who may be thrown straight into Saturday’s Jeddah derby with retooled Al Ahli. Moving in the opposite direction on Sunday was Nigeria forward Ahmed Musa, whose consistently underwhelming performances saw his contract terminated ahead of pointless-giants Al Nassr’s tense all-Riyadh clash against Ever Banega’s Al Shabab.

Here is the lowdown on this trio of must-watch match-week three fixtures:

Ahli emerged from a shaky end to 2019/20 in third, made the 2020 AFC Champions League quarter-finals and are now one of two sides with 100-per-cent records in the top flight. Moroccan midfielder Driss Fettouhi, Serbia anchorman Ljubomir Fejsa and Romania loanee Alexandru Mitrita – scorer of an eye-catching winner on debut versus Al Wehda – have all added mightily.

It is early days. Tuesday’s 2-1 loss to Nassr in the King’s Cup semi-finals proved work is still to be done.

Yet it looks like the capital kings may have another competitor in 2020/21.

Ittihad, meanwhile, required a 93rd-minute stunner from the impressive Bruno Henrique at Fateh to prevent a second-successive loss. They have conceded three penalties from two chaotic games, but will hope the recruitment of Hegazy can ensure they avoid battling the drop for a