The radio veterans have already signed the proper documents for their transfer, Taberna announced in an Instagram post yesterday, Aug. 20.

(The new home of “Dos Por Dos.” It’s official, we’ve already signed! Thank you to the DZRH family of the MBC for the fiery welcome. “Dos Por Dos” on DZRH, coming up next!)

The duo’s “Dos por Dos” program on DZMM ran for 17 years and three months, according to Taberna, before they bade farewell to their listeners on July 31.

Fellow broadcasters and hosts, meanwhile, congratulated Taberna and Baja for finding a new home. For one, GMA’s veteran journalist and broadcaster Arnold Clavio commended the two via Instagram.

(Congratulations! @itsmegerryb and best friend @iamtunying28 I miss you already!) 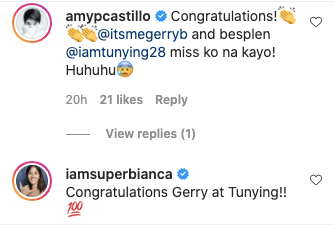 While their transfer is now officially sealed, both Taberna and Baja have yet to announce when their program will go on air under DZRH.  /ra