Ahead of their Europa League semi-final with Manchester United, Sevilla’s main strength is a defence which has allowed just one goal in the last eight games.

But at the other end of the field, the Andalusians also possess one of the game’s fastest-rising and most surprising new stars.

That’s the word to sum up Sevilla: they seek total control.

Coach Julen Lopetegui always builds his teams this way. He likes – or rather insists upon –rigid tactical coherence so that every player knows his role and sticks to it with grim tenacity. The collective shape is paramount and positional discipline is demanded, ensuring the defensive third of the field is always well covered and practically nullifying any vulnerability to rapid counter-attacks.

At Sevilla, Lopetegui has done an outstanding job in crafting a team in that image in just his first season at the club, with an almost entirely new set of players. Nine of the 11 starters in the Europa League quarter-final victory over Wolves on Tuesday joined the club last summer or later (Jesus Navas and Ever Banega were the exceptions), but the coach’s attention to detail and ability to communicate his ideas created the conditions of control that he craves many months ago.

The core of the team is based on the deep-lying trio of central defenders Diego Carlos and Jules Kounde, supported by holding midfielder Fernando, who often drops back to create a three-man backline. In front of that solid platform, Banega pulls the strings in the middle of the field, often by switching play to energetic full-backs Navas and Sergio Reguilon, who provide width and balance with their constant running up and down the flanks.

Those players are the heartbeat of the team, and the organisational strength instilled by Lopetegui has yielded impressive results: Sevilla are heading into Sunday’s semi-final with Manchester United on the back of five clean sheets, and they have conceded just 12 goals over the course of a 19-game unbeaten run which stretches all the way back to early February. Just as Lopetegui likes it, this is a difficult team to play against, and an even more difficult team to score against.

The flip side to Lopetegui’s demand for control, however, is that his team can become sterile and predictable in attack. Ensuring they are never caught short defensively necessarily results in a lack of bodies going forward. By protecting their own goal with such discipline, they can sacrifice the collective ambition and risk-taking necessary to consistently threaten the penalty box of their opponents, with their attacking strategy sometimes reduced to an endless stream of hopeful crosses from Reguilon and Navas.

The accusation Lopetegui has always faced is that he creates sides which are effective, but boring. His obsession with control can chase away the exciting elements of spontaneity and creativity, making the experience of watching his teams akin to examining the careful but cautious probing of a chess match.

Fortunately, however, Sevilla possess the ideal antidote to this problem.

The main reason they have risen above mid-table mediocrity and enjoyed so much success this season, finishing fourth in La Liga and advancing to the Europa League semi-finals, is that in addition to Lopetegui’s vice-like tactical planning they also add the flourish of one man who throws the proverbial spanner in the works. A fast and furious bringer of chaos who can single-handedly turn 0-0 draws into 1-0 victories. A one-man wrecking ball: Lucas Ocampos. 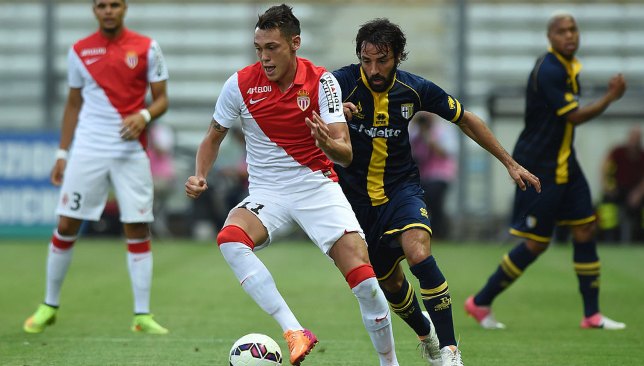 As with many of the best signings conjured by Monchi, Sevilla’s iconic director of football, Ocampos’s arrival from Marseille last summer succeeded in flying so far under the radar it was barely even noticed.

The Argentine first arrived in Europe as a teenager with a big reputation, joining Monaco from River Plate in 2012 for a fee of 11 million euros – a high price for an 18 year-old. A couple of years later he was nominated for the European Golden Boy award (he was beaten to the prize by Raheem Sterling) and genuine stardom appeared to be beckoning. But it didn’t arrive – not at first, anyway.

A move to Marseille in 2015, first on loan and then permanently, proved to be a false start. He struggled to settle with the port city club, not helped by the dismissal of the manager who had signed him, compatriot Marcelo Bielsa. After scoring just one goal in 17 league appearances during the 2015-16 campaign Ocampos was loaned to Genoa and then AC Milan, where he laboured through unremarkable stints (both clubs didn’t exercise their options to buy him) before returning to Marseille and continuing his moderate but far from spectacular trajectory for another couple of years.

Ocampos’s career, so promising in his teenage years, appeared to be drifting towards the status of journeyman. A solid professional, but far from a difference-maker for a major club. As he turned 25 last summer, the path for the remainder of his playing days seemed to be set: a decent squad player for a mid-tier club. Nothing more.

The uniquely gifted eye of Monchi, though, had seen something he wanted to work with, and Sevilla paid the moderate sum of 15 million euros to bring the winger to Andalusia. Fast forward a year, and that fee is starting to look like a bargain even by Monchi’s standards, because this is a player who is almost unrecognisable from the man who struggled to regularly fulfil his potential during his five years in Ligue 1.

Not only did Ocampos take Spanish football by storm to lead Sevilla’s scoring charts with 14 league goals (the joint sixth-highest in La Liga), helping to secure a return to the Champions League with a fourth-placed finish, but he is now spearheading their charge towards yet another Europa League crown after netting the only goal in Tuesday’s quarter-final victory over Wolves.

And what’s more, he is absolutely the perfect player for Sevilla, delivering qualities that would otherwise by conspicuous by their absence.

Let’s indulge in a flight of fancy and picture a theoretical scenario whereby a group of footballers are placed on the halfway line with a wall of defenders in front of them, tasked with getting the ball into the back of the net in a manner of their choosing.

Lionel Messi, we can imagine, would prefer to loft a perfectly placed angled pass into the stride of his left winger, and then run onto a cutback to stroke a first-time left-footed shot low into the bottom left corner from the edge of the box. We’ve seen it hundreds of times.

Cristiano Ronaldo? Well, he would probably run straight into the penalty area and leave the ball on the halfway line with his teammates, expecting them to find a way of servicing him with any form of goalscoring opportunity.

Neymar, on the other hand, would take the ball off the centre spot and attempt to dribble past any defender who came near him, using all manner of tricks and flicks to gradually slalom his way towards goal – and if all else failed, he would just fall over.

Lucas Ocampos, though, would just run. Straight, fast, and hard, taking the shortest possible route towards goal and barrelling over any opponent daring to stand in his way, before thumping the ball as hard as possible with the threat of breaking the goalkeeper’s wrist if he attempted to make a save.

This is a player who takes the word ‘direct’ to new levels, combining pace, power and aggressive intent to quite simply bludgeon his way into goalscoring positions.

In this respect, he is everything that Sevilla, otherwise, are not: Lopetegui’s system is calm and measured, Ocampos is hectic and dynamic; Sevilla are slow, Ocampos is fast; Sevilla play sideways, Ocampos goes straight to goal; Sevilla like keep the opposition in front of them, where they can see them, Ocampos dares to take risks and run in behind, upsetting the structure of the game; Sevilla prefer to gradually guide the ball towards the opposition goal, Ocampos says to hell with that, I’m getting there as quickly as possible.

Sevilla are control, Ocampos is chaos.

None of this means that Ocampos lacks other qualities. He is also technically excellent on the ball, more than capable of beating defenders through guile and fast footwork as well as speed and power. And he has positional intelligence, especially in his ability to create space for overlapping full-backs by moving inside and leaving the flank free.

He is also versatile. Although he mostly lines up on the right wing, and is expected to do so against Manchester United with Munir El-Haddadi on the left, he can also operate from the other side of the field and allow Lopetegui, if he’s feeling daring, to also field his other main creative talent, Suso, on the right as he did from the start against Wolves.

Another Ocampos attribute is his excellent aerial ability, demonstrated with his deft flick from Banega’s angled cross for the only goal of the quarter-final. The Argentine is a big man, standing six feet two inches tall, and he uses that frame to physically intimidate opposing defenders both on the floor and in the air.

He also has a big personality and a sense for drama, revelling in responsibility and taking key moments in his stride. The winner against Wolves was the 11th time he has netted the opening goal of a game for Sevilla, and 14 of his 18 goals this season have either given his team the lead or pulled them back from behind – including a late equaliser for Argentina against Germany on his full international debut in October.

When Ocampos does something, it is generally meaningful – and his talent for the theatrical was best encapsulated towards the end of the league season, in a home meeting with Eibar. It was a significant game for both teams as Sevilla sought to secure a top-four finish, while the visitors were battling against relegation. Not content with merely opening the scoring in a tight game midway through the second half, Ocampos proceeded to heroically secure his team’s 1-0 victory by going in goal in stoppage time after regular keeper Tomas Vaclik was injured, and producing a miraculous double-save from a corner including one from opposing goalkeeper Marko Dmitrovic.

It was one of the most spectacularly memorable moments of the whole season in La Liga, underlining Ocampos’s role in turning Sevilla from a decent and well-organised bunch of control freaks into a match for any opponent.

From misfit with Marseille to one of the hottest properties in Europe, the 2019-20 season has been a remarkable transformation for Ocampos, and his reputation could yet hit new heights in the coming days. Manchester United beware: the control-busting wrecking ball is heading your way.