Luke Woodland’s life has been full of the unexpected.

The utility defender was born in Abu Dhabi, but raised in Liverpool. A starring role for the Philippines at January 2019’s Asian Cup would follow, even though he represented England’s youth sides alongside a spritely Luke Shaw and Will Hughes.

Coronavirus provided another unpredictable twist. He is undergoing quarantine in Bangkok after being marooned back home on Merseyside in the wake of March 4’s emergency call to postpone all Thai League 1 fixtures.

Ratchaburi Mitr Phol are the 11th employers of a nomadic career that has also included stints in the lower leagues, adopted nation and Malaysia by the age of 25.

Opening impressions of a managerial great, however, stand out. Even among these extraordinary experiences.

“It was mad,” Woodland tells Sport360. “We were in Doha for a friendly and [Cardiff City goalkeeper] Neil Etheridge came into my room and said ‘Sven’s our manager.’

“I said: ‘What are you talking about? Get out of my room.’

“But I went to lunch and Sven walks in. I was thinking, ‘what is going on here?’

“This was mad. It was great to have Sven as a coach on my CV, with maybe the last team he manages.

“Scott Cooper [then assistant manager, now in sole charge] did a lot of the work, but Sven picked the team and chose the tactics, giving us a kick up the a*se when we needed it.”

It would only be a brief dalliance. Eriksson oversaw Group C defeats against heavyweights South Korea and China, plus a damaging reversal to fellow new boys Kyrgyzstan which sent them home.

“We played a back five against South Korea and only lost 1-0, parking the bus for the whole game,” Woodland recollects. “We played three at the back with wing-backs, I played well as centre-back.

“The next game was at Al Jazira’s stadium versus China. He asked me to play wing-back.

“He just laughed and asked me to do a job for him.

“He also spoke to me about the England youth teams, coaches who were with my team and stuff. He kept himself to himself, never getting worked up.”

The memories that Eriksson tapped into still endure.

Woodland earned call-ups for England Under-16s, U-17s and U-18s as a promising scholar at Bolton Wanderers. This nascent talent would expose him to some of the modern game’s brightest stars.

He says: “I looked at a team sheet of a game we played against France in the Algarve. Their team had Adrien Rabiot in centre midfield, Thomas Lemar and Anthony Martial up front.

“I did not realise that at the time.

“Sergi Samper [then at Barcelona, now playing with Andres Iniesta at Japan’s Vissel Kobe] was unbelievable [for Spain]. Next, next level.

“He was ridiculous. Hector Bellerin was there, too.

“His pace and technical ability combined was ridiculous.”

A “flawless” future Manchester United left-back stands out for his football ability… but not his general knowledge.

Woodland reveals: “I remember sitting at the table [on England duty], there was a couple of the lads; me, Luke Shaw, Jordan Graham [who left Wolverhampton Wanderers this summer] and Callum Chambers.

“We were doing a quiz and I remember Jordan saying to Luke: ‘You’re lucky you are good at football, otherwise I don’t know what you’d be doing.’

“Shaw didn’t stand out in a way that he was doing ridiculous stuff, it’s just he’d never, ever make a mistake, last 90 minutes, make tackles, put in quality crosses. He was just flawless and he was so quick.

“When he made his debut [for Southampton in 2011], he sparked more younger players being thrown in at the deep end.”

Woodland’s 12-year association with Bolton ended in 2015, without registering a first-team appearance. Rob Holding was an academy team-mate.

Divergent paths have been taken by the pair.

The elder Woodland would flit between lower-league outfits Chester, Bradford Park Avenue and York City, either side of a brief attachment to League One strugglers Oldham Athletic. Then came 2017’s horizon-expanding switch to Filipino giants Ceres–Negros – now named United City.

Holding would, in contrast, excel when thrust into Bolton’s first team as a teenager and be snapped up for £2 million by Arsene Wenger’s Arsenal in July 2016.

These contrasting fates did not, always, seem determined.

“Good lad, great banter,” Woodland warmly recalls of Holding. “I used to meet him on the train at [Manchester] Piccadilly and go on to Horwich [near Bolton’s training facilities].

“There was a time when he wasn’t really playing much. Rob was, basically, being used by the coach to clear the balls up because he was one of the younger players.

“Rob wasn’t happy, but he just cracked on. Those managers left, David Wheater got injured, he gets into the first team [in August 2015] and then gets his move to Arsenal.

“It’s just mad, looking back on it. At one stage, he was just on the bench and thinking about doing something else.”

It’s been some journey, to date, for Woodland. But thoughts about the UAE have rarely drifted from his mind.

He was born on Abu Dhabi’s Corniche in 1995, departing for the United Kingdom two years later.

This is only a fraction of Woodland’s life.

Yet April 2018’s ground-breaking decree from Khalifa bin Zayed Al Nahyan, Emir of Abu Dhabi, the Supreme Commander of the United Arab Emirates Armed Forces and chairman of the Supreme Petroleum Council, made it possible for expatriate children born in the UAE to represent the national team and play in the Arabian Gulf League without taking up a, cherished, spot in the four-man foreign quota. 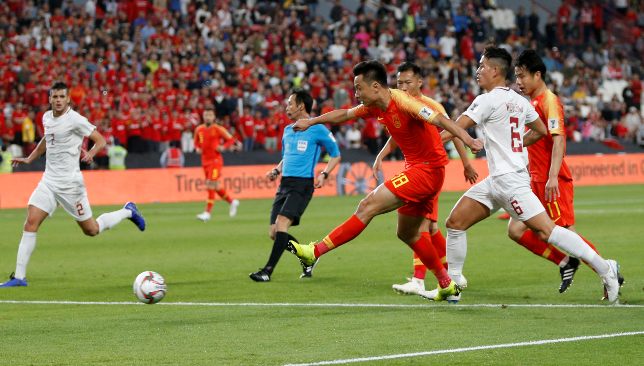 Luke Woodland (no6) in action against China at January 2019’s Asian Cup (EPA).

Al Jazira’s Abdullah Ramadan and Al Ain’s Yahia Nader have, among others, used this landmark ruling as a springboard.

Woodland, however, has not followed suit, despite preliminary talks with top-flight outfits. A sense of ‘what if…’ is present, thanks to June 2015’s international bow for the Philippines.

He says: “I was born in Abu Dhabi – my mum and dad were both working there. My dad is British and my mum is Filipino.

“My dad was, basically, running one of the tennis developments over there and my mum was working.

“I was born over there and stayed for two years, then my dad wanted to come back to the UK because of schooling back then.

“I go [to the UAE] quite a lot. In the off-season, most of my trips are there.

“[At the Asian Cup] I got quite a lot of publicity off the local Arab reporters.

“I’d spoken to a few clubs in the UAE before and the reporters knew. It’s quite a complicated issue at the moment.

“The four foreign spots are taken by marquee players, so that’s out of the window. Any expats born there can now play, but the only thing hindering me getting a contract straight away as a local player was the fact I’d played for the Philippines.

Thailand has, instead, grown into a regular feature of Woodland’s professional life. But attachments to Buriram United, Suphanburi and Ratchaburi have not been without incident.

Woodland says: “My luck in Thailand hasn’t been the best. I signed for Buriram United [in June 2018] and then went on loan to Suphanburi.

“I came in to Suphanburi, with a Thai coach who doesn’t speak English and the team is in a relegation battle. First session I was trying to make my mark and one of the lads came in quite hard on me.

“I turned around said: ‘If you come in again, you’re not going to like what will happen.’

“He came in and did it again. Next time he got the ball, I just scissored him.

“I didn’t realise at the time, but the manager was not having it. I got a call from my agent that night and he said: ‘I heard you nailed one of the Thai boys and the manager is not happy.’

“That killed me for the rest of the season.

“I then went into the [2018] Suzuki Cup and got injured. I then trained really hard at Buriram, went to the 2019 Asian Cup and did really well, came back to Buriram and knew straight away after the first few sessions that the gaffer didn’t want to speak to me.

“I went to Malaysia [playing for Kuala Lumpur in 2019], going into a team that was struggling. It was a battle for a year, my personal statistics were good – top year for me.

“My agent had already lined up Ratchaburi.

“But I had a niggle in my back in the week leading up to the start of this season. The manager had told me I’d be starting most of the games.”

Woodland, ruefully, watched on as an unused substitute when Ratchaburi raced to four-successive victories upon 2020’s kick-off. Forces outside his control pushed this period of inactivity into a sixth month, even though prompt action has kept Thailand’s Covid-19 count to one of Asia’s lowest.

Uncertainty and frustration have defined this “horrible” period. September 12’s resumption however, provides hope about another fresh start in this career of unanticipated turns.

“It’s been horrible,” Woodland says. “The Thai League has a 50-per-cent [wage] cut until the league starts, then it goes back up.

“Speaking to my agent and he’s not sure if all the teams will survive, whether the ones that do will last beyond next year…

“I’ve been taking it easy, aiming to keep the weight down. We were supposed to be back on July 3, but there were problems.

“There were [approximately] 80 staff and players all abroad, in the same situation.”