From the depths of English rugby to the heights of European glory, this is the story of Exeter Chiefs

In 1996, when Toulouse clinched their first European Cup, a young Rob Baxter was captaining Exeter out of the English fourth division in front of a few hundred fans on the south coast.

Not normally a man known for bursts of emotion, the 49-year-old must pinch himself when contemplating how far the club has come over the last twenty-four years.

After retiring as a player, Baxter went into coaching and has transformed the Chiefs from Devon minnows to a team now on the cusp of Premiership and European glory.

Exeter’s thrilling win over Toulouse last weekend means they will play Racing 92 in their first-ever Champions Cup final next month. A sweet victory in just their 10th year as an English top-flight team.

What’s remarkable about their fairytale story is that it hasn’t come true because of heavyweight Southern Hemisphere signings or rich Middle Eastern owners, but from creating a ferocious work ethic, committed culture and willingness to win.

After a series of unsuccessful skirmishes in the early years, the Chiefs only gained promotion to the Premiership for the first time in 2010 after beating Bristol in the Championship play-offs.

The cries from Devon would surely have been heard all over Britain after years of near-misses as the club longed for a place in English rugby’s top tier.

Since that sunny day in May over a decade ago, it’s been a gradual but swift evolution, which has also included Heineken Cup qualification in 2014 and winning the LV Cup in the same year.

Exeter’s steady, yet positive development saw them reach their maiden Premiership final in 2016, losing out to Saracens in a one-sided contest at Twickenham.

You have to lose one win before you win one, and that defeat would surely have added character, hunger and experience into a young ambitious team.

Just when they expected the new season to start productively, they suffered a comprehensive defeat to Clermont in Europe and a further four losses in six league matches, sparking early-season crisis talks between players and management.

It would turn the course of their 2016/17 season as Exeter went on to win 15 of their next 16 matches and secure a place in the Premiership decider for the second successive year.

And then came the crowning moment. Exeter claimed a famous extra-time win against Wasps to cap off an incredible journey from promotion to English champions in seven years.

It was fitting that the man who kicked 24 points to guide Exeter from the Championship to the top flight in 2010 was also pivotal to their Premiership triumph.

Gareth Steenson, who joined the club 12 years ago from Ulster, converted a late penalty to earn the Chiefs a historic win. It remains the club’s only Premiership triumph to date after losing finals in 2016, 2018 and 2019.

Dubbed one of the ‘originals’ alongside Phil Dollman and Ben Moon, Steenson has seen more bad days than good during his time playing on the south coast.

Although the 36-year-old may lack the same magic of previous years, he is one of a stellar group of players to set the tone in the dressing room.

There is so much to admire about the club, especially when seeing players commit for long contracts and enjoy their work on a day-to-day basis.

The Chiefs are superbly run on and off the park, with a fantastic culture and vibrant style of play. This combination of hard work, humility and willingness to improve has seen them evolve into one of the most potent forces in the game.

They can play a number of different ways, whether advancing to the opposition half at pace, and then bounding through the phases to apply pressure, or counter-attacking from deep. It is exciting to watch and returns success on the scoreboard.

Any player that comes into the Chiefs’ dressing room seems to love the positive playing environment. Scotland ace Stuart Hogg, who signed from Glasgow last season, has repeatedly praised the upbeat atmosphere, admitting his time at Sandy Park is the happiest he’s been in a long time. 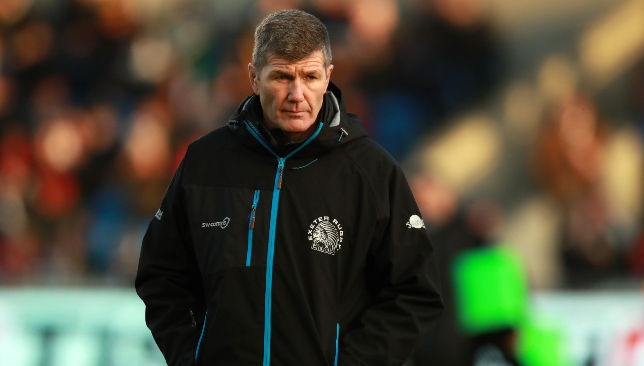 Maybe it’s Baxter’s ability to identify players who fit his side without spending large amounts of money that is one of the key differences, seen from signings drafted in steadily over previous seasons.

In 2015, he enticed Thomas Waldrom, Julian Salvi and Geoff Parling to leave Leicester for Devon – moves which revived each players’ careers having stalled at Welford Road.

Baxter also signed Olly Woodburn and Ollie Devoto from Bath, and James Short from Saracens. Each player has brought a sprinkle of class to the ranks while adding to the fabric of a club on the rise.

Some players have, naturally, come and gone over the years, but the recent acquisitions of Jonny Gray and Hogg has added another level of steel to the squad.

Such is their sheer quality, both Scotsmen can often be the difference between winning and losing. Hogg, for example, is widely regarded as the best full-back in world rugby.

Away from the external recruitment, the academy is perhaps the focal point of Exeter’s glowing reputation.

The system has produced Jack Nowell, Henry Slade, Luke Cowan-Dickie and Sam Simmonds, all of whom have sparkled on the international stage with England.

Zimbabwe-born Don Armand, capped by England twice, is another to star under Baxter. He joined the club in 2013 and has developed into a totemic backrower, captaining the side on many occasions.

Aside from the quality players, strong culture and ambition to constantly improve, the continuity of the same coaching ticket under Baxter has ensured high-standards and a close relationship with players.

Ali Hepher (head coach), Rob Hunter (forwards coach) and Ricky Pellow (skills coach) have all been employed at the club since 2009, 2013 and 2009 respectively. It is their hard work and passion that has been pivotal to Exeter’s progress.

Seeing the seeds sown long ago now blossoming has only added to the enhanced reputation of the club, and the attractive brand of rugby they continue to play in England and Europe.

On the domestic front, the Chiefs ended this season sitting top of the table with what many believe is their best chance of glory since their title-winning season in 2017.

With Saracens demoted to the Championship for next season and hit with a 105-point deduction for repeated salary cap breaches, it immediately installed the West Country outfit as Premiership favourites.

The lessons learned from their four league final appearances – three of them defeats – will ensure Exeter will take nothing for granted. Now they are just four games away from a second title.

In Europe, serious strides have been made, advancing past the quarter-final stage for the first time last month, and now on the brink of a maiden European crown.

If they can maintain the same ferocity and purpose against a strong Racing side next month, it will mark a seminal chapter on the Chiefs’ journey under Baxter.

For a team once considered average, there is so much to admire about Exeter’s rise towards the top of English and European rugby.