Football is constantly evolving and with data plus in-depth analysis growing exponentially in the modern game, new tactical innovations are made with increasing frequency.

As a result, formations are being manipulated in more creative ways and players of a particular skillset are being used in roles they perhaps wouldn’t be in previous decades.

Philipp Lahm was an ideal example. Renowned as one of the best right-backs around for most of his career, Pep Guardiola deployed him in midfield as the central cog in a possession-based system.

How many other players from the past would thrive in different positions in today’s game? How many more goals would Ryan Giggs score as an inverted winger in a front three? Could Fernando Redondo have been a stylish centre-back on the left side of a back three bringing the ball out and even attacking on the overlap?

In this series, we look at past legends and theorise the possible new positions within the tactics of the modern game.

Let’s begin by stating the obvious. Patrick Vieira would be a phenomenal midfielder in today’s game or any other era.

Given the demands of the modern centre-back though, it’s conceivable that the lanky Frenchman would’ve been deemed ideal for the position. In the age of ball-playing central defenders, he reign supreme.

Juventus’ Leonardo Bonucci is a point of reference in a tactical and positional sense as one of the best centre-backs at present in terms of distribution and bringing the ball out from the back. However, his style of play is hardly comparable to Vieira’s.

In truth, there isn’t a defender in the modern game that marries silk and steel quite like he did. Which is why he may well have stood out as an extraordinary centre-back. 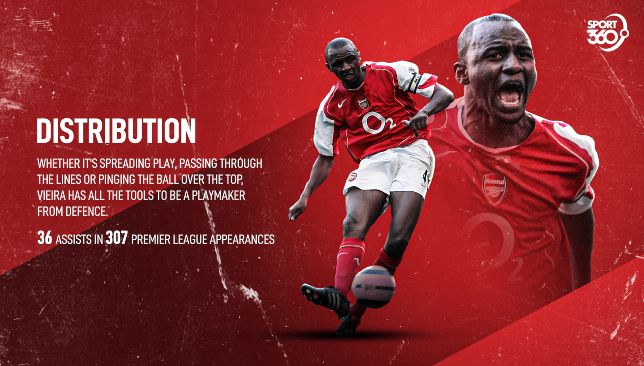 Arsenal fans were left stunned when Manchester United scored an extra-time winner against them in the 1999 FA Cup semi-final. Not only because Ryan Giggs weaved his way through their world-class defence and finished emphatically into the roof of the net but because it was Vieira’s loose pass that he intercepted at the halfway line.

Vieira simply didn’t misplace passes. That was an anomaly and it occurred at the worst possible time.

The midfielder was renowned for the manner in which he retained possession, manoeuvred cleverly to open up passing lanes and fed those around him. He conducted Arsenal’s midfield with aplomb, baton in hand.

That’s why it’s no stretch to envision him having a huge influence on the game even from centre-back, especially in teams today who are determined to build play from the back.

Whether it’s effortlessly spreading play to the flanks in one sweeping motion, breaking through the lines with incisive forward passes or pinging the ball over the top of the defence for a striker on the move, Vieira had all the tools in his arsenal [pun intended] to operate as a playmaker from defence. 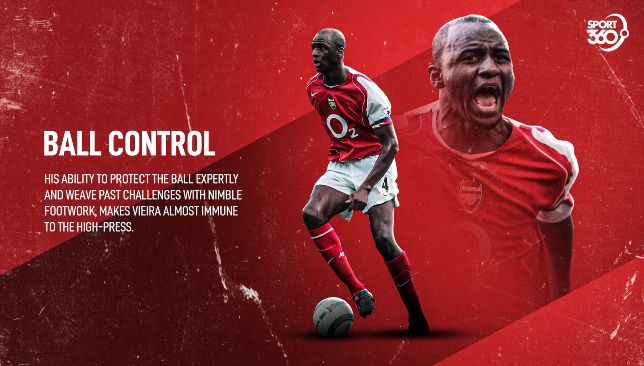 When you think of Vieira playing as a centre-back, the immediate concern is that he would be limited. It seems wasteful not make full use of his ability with the ball at his feet. But he wouldn’t be an ordinary centre-back. No, we’re talking about a modern day Franz Beckenbauer with the liberties that current tactics would afford him.

Step aside, Virgil van Dijk, and make room for the rangy strides of Patrick Vieira gliding forward from defence.

The iconic Arsenal skipper was renowned for his role in the transition. Not only would he win possession but wasted no time carrying the ball forward to lead an attack on the break.

With his ability to protect the ball with such expertise and weave past challenges with little shimmies and nimble footwork, Vieira would almost be immune to today’s popular high-press. 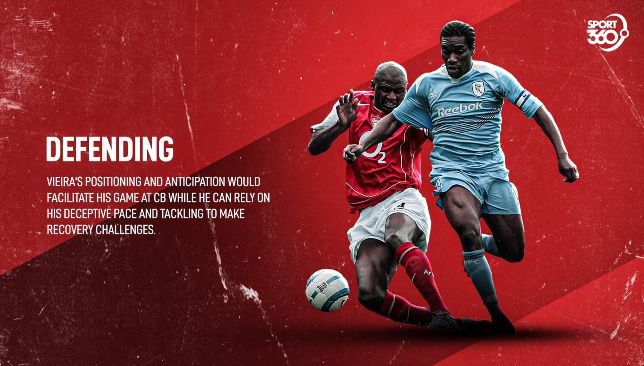 The World Cup winner was a force of nature and a colossus in the middle of the park, protecting the back four with equal parts grit and grace while linking up with the attack in his tempo-dictating stylish fashion.

But despite the progressive facets of the role, as a centre-back, Vieira would still have to perform its primary task; defend.

His qualities as a defensive midfielder like impeccable positioning and anticipation should translate into his functions in the backline. A good example is the way Fernandinho has dropped into central defence at Manchester City or how Javier Mascherano did the same for Barcelona years ago.

Of course, there are several intricacies to the position that we can’t be certain Vieira would grasp seamlessly but the reality is that you don’t necessarily have to be an entirely astute defender to thrive in the modern game if you have the attributes to bail yourself out of trouble.

That’s where Vieira’s deceptive pace and outstanding tackling comes into play. Even if a forward should steal a march on him, the Gunners legend can rely on his speed and reach to make recovery challenges.

Then there are other aspects of defending that should pose him no problems at all. Given his strength and imposing physical presence, he should be adept at holding off strikers and out-muscling them. Meanwhile, an impressive leap bodes well for his need to dominate in the air.

The more you dwell on it, the more it seems like he would most likely smash the record transfer fee for a defender. Place him in the right possession-based system today and Patrick Vieira, the centre-back, would be Invincible.