The US Women’s National Team is a powerhouse on the global stage, winning four of the past eight soccer World Cups.

From their unbeaten records and unchallenged medal collection, any young athlete growing up Stateside will be inspired by their dominance.

But they’re not the only impressive US women’s team. Indeed, their rugby compatriots are enjoying their own rise.

But with both the senior women’s 7s and 15s teams excelling, perhaps their biggest success will be to inspire a new generation of young athletes to take up a sport which is developing strongly in the US.

Star talents like Naya Tapper have blazed a trail.

Since her debut in 2016, the South Carolina native has cemented her status as one of the best players in the sevens game, scoring 86 tries.

Remarkably, she only took up rugby in her late teens after a successful track career.

“There are so many girls’ rugby teams that were never around when I was coming up or at least I never heard of them. That was only six years ago,” the 25-year-old tells Sport360.

“I even have my own female rugby camps now. There are so many opportunities for females in rugby in the US now. Division 1 schools offering rugby scholarships. So many more female fans and future female rugby. It’s amazing the growth that has come out of being role models for these girls.

“I can’t wait to see how much they outgrow us in the game and in the numbers.”

On the men’s side, poster boys like Carlin Isles – a former track athlete with a personal best 100m time of 10.15 seconds – and Perry Baker – a former NFL hopeful – are producing magic will ball in hand to help grow their side of the game.

Granted, the 15s is yet to blossom on the grand stage. They are still very much a work in progress, ranked 16th in the world, below the likes of Samoa, Italy, Tonga and Georgia.

A landmark win over Scotland in June 2018 helped them to a highest-ever position of 12th in the global rankings. However, Gary Gold’s side have failed to overcome any tier-one nations since.

Their most recent Rugby World Cup campaign was far from a success either with defeats to England, France, Argentina and Tonga.

And in their nine World Cup appearances so far, they have only registered three victories from 25 matches, with the last win coming against Russia in 2011.

Yet, there are signs of promise in the shorter format as they finished second in the global series in 2019. During this glittering campaign, they won at home in Las Vegas and reached finals in Dubai, Sydney, Cape Town and Hamilton.

Over the years, the US have boasted quality names like Blaine Scully, Dan Lyle and Chris Wyles, players who spent most of their respective careers thriving in European leagues.

Because of rugby’s strength in the northern hemisphere, the PRO14, Gallagher Premiership and TOP 14 competitions will always appeal to rising stars from both a career and financial perspective. These contract offers may only come around once so it is important players make the most of a short professional career.

Of the 32 man USA squad selected for the 2019 World Cup, 16 players currently ply their trade in Europe, while 15 are based in America and one – Scully – has recently retired.

So for both the senior women and men sides there is a lot of positives, but ultimately the development of the sport will come to what goes on beneath them. 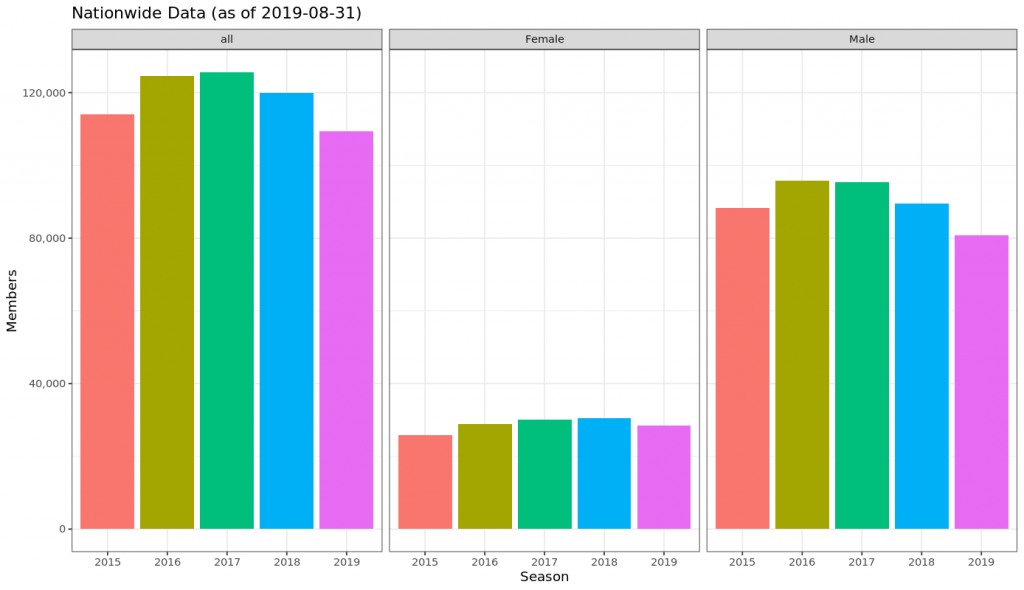 USA Rugby CEO Ross King does admit membership numbers have gone down slightly over the past two years – with the 2019-20 season “set to drop significantly due to COVID-19”. Membership numbers will always ebb and flow but the overall direction is good.

At high school level, there are over 26,000 people participating, eight times more than there was a decade ago. At the college level, the number is also promising, standing at just over 30,000.

This level of growth is a significant indicator of how far the sport has come in the States and the key now is to develop that solid pathway from players shining at high school or collegiate level to the Major League Rugby (MLR) – America’s first professional league.

If managed in the right way, the number of gifted athletes potentially available across a country of 328 million people would have all established rugby countries looking over their shoulders.

“We hope to capture the interest of young athletes through the very unique element of camaraderie in rugby, along with Olympic and Rugby World Cup aspirations,” said King.

“Pragmatically, it is important for the USA Rugby community to work towards building and fostering rugby programs through the American scholastic systems, particularly in High School and College.

“It is, of course, a very complicated space that rugby is still trying to navigate, however, we believe these are the best paths forward when engaging the youth community.”

There is a massive pool of physically gifted young American athletes which means that one big factor is on their side. Picking up the skills and game intelligence will come with training and more exposure to top-level rugby. It is the same across any sport. Learning where to be at different times, honing various ball skills and what to do in different situations in attack and defence.

This is where the talent transfer initiative has worked so well for USA Rugby over the years, designed to identify high performing Division 1 students and athletes of diverse sporting backgrounds who fit an established athlete profile.

It’s a brilliant concept, finding that star who is interested and good enough to play rugby at a professional level, or who may have fallen by the wayside in their respective sport.

Tapper came through this programme, along with Alev Kelter, a former ice hockey player, and Kristi Kirshe, a former soccer player.

All three are just examples of gifted athletes who took up rugby at a late age, and have emerged as outstanding rugby players.

“Track was my life for a long time. Over time it got kind of boring and heading into college, I wanted to enjoy myself and not be tied down to a varsity sport,” Tapper explained.

“Rugby at my school was a club sport so I wouldn’t have many obligations. It was also a team sport which was something I felt I missed out on while running track all my life.

“Track is very much individual and rugby was the complete opposite of that. Rugby involved contact which was something I loved.

“I was a rough child growing up and loved to play football with the boys. I used to dream of being the first girl in the NFL until I found rugby.

“I found my home, my passion. I was introduced myself to rugby by one of my math teachers in high school but because I was running track, I never actually participated in the sport until college.”

Pathways like the talent transfer initiative can help people get familiar with a new sport and develop skills fast. While it is not the only pathway for players, it is a major coup for USA Rugby to be able to attract these talented athletes from different sports.

“Our pathway development and recruiters do understand the broad community of promising rugby players that have grown up through other sports here in the US, and have done a great job converting many to rugby. While not the only pathway for elite level players, it is a major piece of the pie,” King said.

“With those athletes, we try to promote how the skill sets they have built in other sports can be advantageous on the rugby pitch, thus creating an immediate relation to a game they may not be familiar with.” 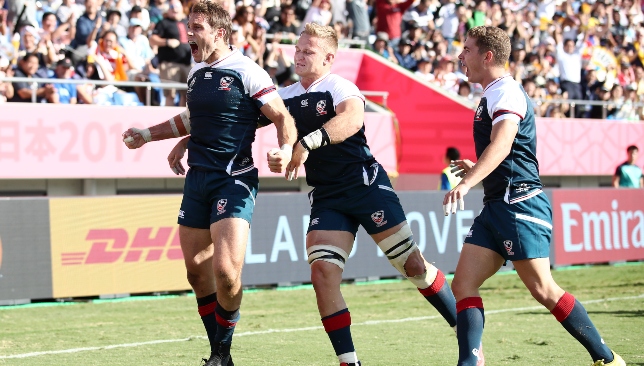 Having professional domestic competitions like the MLR and Women’s Premier League can provide that goal and pathway for players at high school and university looking to represent the international team in the future.

In just its third season, the MLR has delivered a stage for the full format to prosper. Two new sides, Dallas Jackals and LA Giltinis will join an expanded 13-team competition in 2021. With more teams, it will provide more playing opportunities for young talented American players.

“It’s quintessential really. Annual domestic competition across major markets is standard to the US sporting landscape, where every successful team sport has that foundation. This past Rugby World Cup was the first where the USA rostered a fully professional team, thanks to the MLR,” King said.

“Along with the Women’s Premier League, each team provides a pathway for young rugby players looking to represent the USA on an international stage. The long term benefits are still to come as the league is young, but USA Rugby is focused on doing our part in the continued growth of the league.”

Budgets are small in the MLR with the salary cap currently sitting at $500k – compared to £7million in England’s Premiership – and the maximum individual rate at $45k. It may not be close to the financial muscle of some European clubs but this has not deterred the interest of big-name imports.

MLR is, of course, in the business of making money. There is no written rule that says they have to develop homegrown talent.

However, there should be a balance struck between working your domestic players and bringing in the right amount of foreign players to elevate the technical game.

The marquee players will help the rise of rugby, but ultimately, the product needs to be entertaining for viewers, especially in a competitive local sports market.

There are all sorts of obstacles but hope lies ahead. Look at Japan. Its Top League only began in 2003 and draws small crowds, yet the Brave Blossoms reached the World Cup quarter-finals last year.

And after 2019’s big push to Japan, a westward expansion for the World Cup could change the face of the sport once again. The USA had put itself forward as a potential host of either the 2027 or 2031 tournaments. With the right people and partners, it is achievable.

For a successful domestic competition to lead to a successful national team, the US must continue developing the grassroots game to provide that link from youth to the professional ranks.

This will give athletes more of a chance to learn how to play rugby, develop their skills and give them a readymade pathway to the MLR and international game.

“Organisationally, we are in the heart of a reform period where the rugby community is looking to take a step back and reassess. The hope is to adapt to the evolving sports landscape and rugby itself, so we can better plan a path forward,” said King.

“Goals for us as USA Rugby are to build a sustainable operating model as an organisation, reinvigorate the grassroots rugby community and hope to see the international game reflect those strong foundations.”

In time, if this works well, the quality at local and international level will be encouraging and successful.