A Saudi Professional League season unlike any other is, finally, in the books.

Coronavirus’ devastating spread in March meant 2019/20 extended to an, unprecedented, 384 days. Memories will, however, endure of Al Hilal’s majestic sweep to a record-extending 16th title, of Al Fayha falling through the trap door into Prince Mohammad bin Salman League on the tightest of final days and giants Al Ahli Jeddah, just about, clinging onto their AFC Champions League-berth.

Here are the key performers – with the help of Wyscout and SofaScore – from this unforgettable campaign:

Bafetimbi Gomis didn’t get the most goals. That was Abderrazak Hamdallah with 29.

He didn’t get the most assists (Al Faisaly’s Youssef El Jebli on 12), or, of course, keep the most clean sheets (Al Nassr’s Brad Jones with 12). Yet, his influence on this season is incalculable.

The ex-France centre forward was the beating heart of last month’s defining 4-1 obliteration of – then – holders Al Nassr. His hat-trick in December’s 7-0 annihilation of Al Adalah also evidenced fearsome fire power within the Hilal ranks.

More hallowed days, surely, await after a two-year contract extension was inked in May – and celebrated, naturally, with some piping hot gahwa (Arabic coffee). 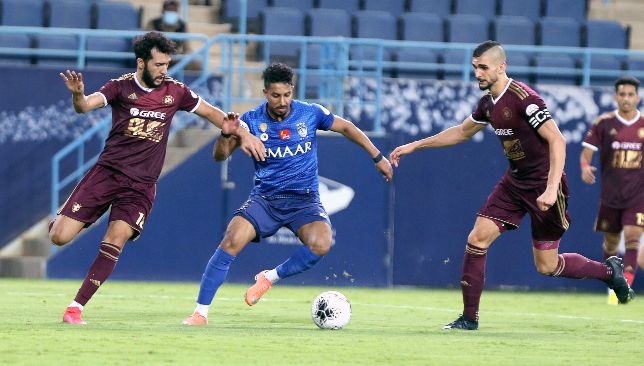 Any match is improved by Salem Al Dawsari’s presence.

Vibrancy and whim details his every possession, with the inventive winger always looking to craft an opening. What will have pleased the Al Hilal management even more this term is the increasing effectiveness of the 28-year-old’s contributions.

A combined tally for goals and assists of 11 was three more than 2018/19, plus two greater than nearest countryman Ammar Al Najar of Abha in 2019/20. This pair, with 19, also led the way for key passes among Saudis.

Contained within Al Dawsari’s highlights was the breakaway effort at Al Adalah, where pairing of a sprinter’s pace and ballerina’s footwork crafted one of this term’s finest efforts.

A spiteful end to a dreadful 2019/20 was experienced by the disgruntled Leandre Tawamba and distraught Al Taawoun.

Yet, they shouldn’t forget how beautiful their partnership once was. Reminder was provided in November’s 3-1 triumph against Al Shabab when the man built like a heavyweight boxer delivered a deft lob with the precision of a major-winning golfer.

Visiting winger Danilo Asprilla was forcefully robbed within the Taawoun half. An adroit first-time ball from alert Cape Verde winger Heldon played the on-rushing Tawamba into space, 25 yards from goal and to the right of the penalty box. 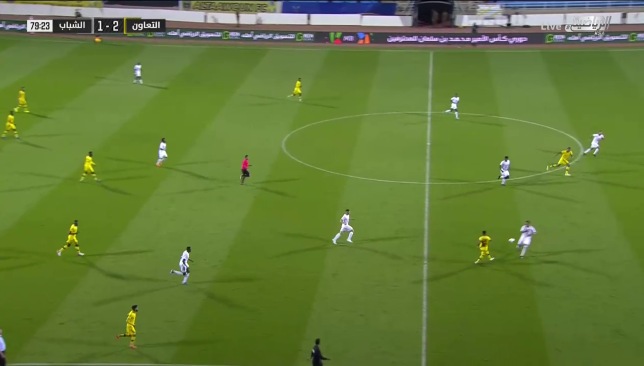 Little seemed on now the Cameroon striker’s touch, allied with pressure from the retreating defender, had pushed him wide. Tawamba, though, looked up to see Farouk Ben Mustapha tantalisingly positioned off his line. 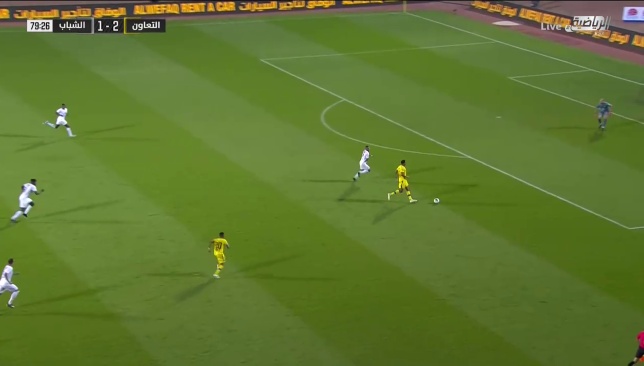 A measured connection then saw the ball gently float over the flailing Tunisia goalkeeper and across the line. 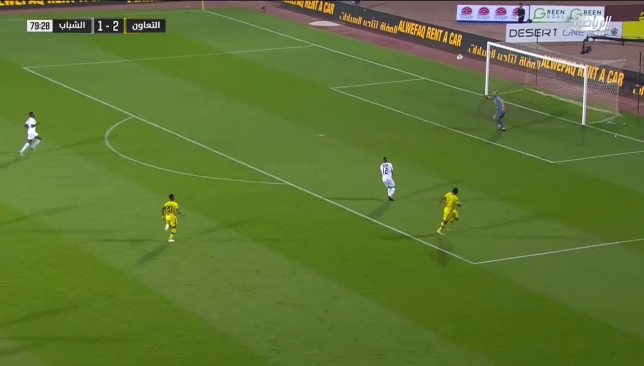 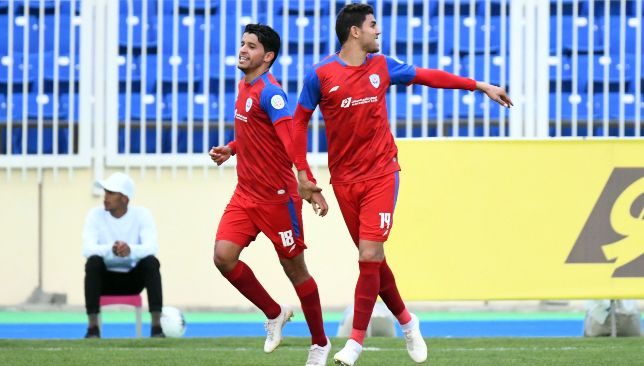 Promoted sides, especially, live and die by their recruitment.

There can be no question that Abha struck gold when they landed slight playmaker Saad Bguir from Esperance de Tunis. This pedigree as a serial trophy winner at an African powerhouse injected critical quality into a club who had endured a decade-long SPL absence.

Bguir’s contribution of 11 goals and seven assists represented the fifth-highest combined tally within the top flight.

He outscored his nearest team-mate by seven and got three more assists than anyone else. These 18 contributions accounted for 42.9 per cent of Abha’s 41-goal tally.

This helped make the difference between a comfortable ninth-placed finish and following fellow new boy Al Adalah straight back to MBS League. 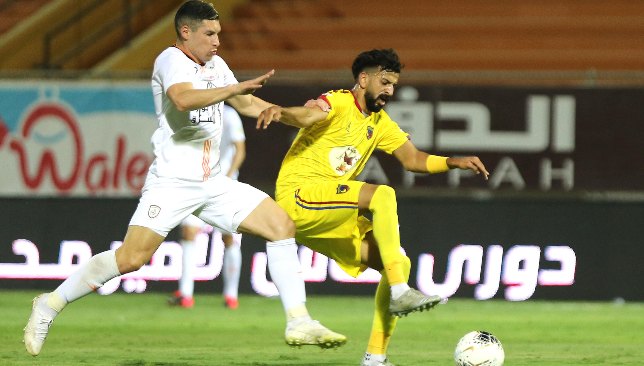 From within the wreckage of Al Hazem’s dire season, a Saudi jewel is emerging.

Osama Al Khalaf was exceptional at right-back for a side now doomed to play in Prince Mohammad bin Salman League in 2020/21. The 23-year-old, however, has already been snapped up by Nassr as they plot to reclaim the SPL crown.

The runners-up will have been impressed by a return of three goals and two assists from the two-times-capped Saudi Arabia international. Their pool of young talent is enviable, with midfielders Mukhtar Ali and Abdulrahman Al Dawsari also possible contenders for this gong. 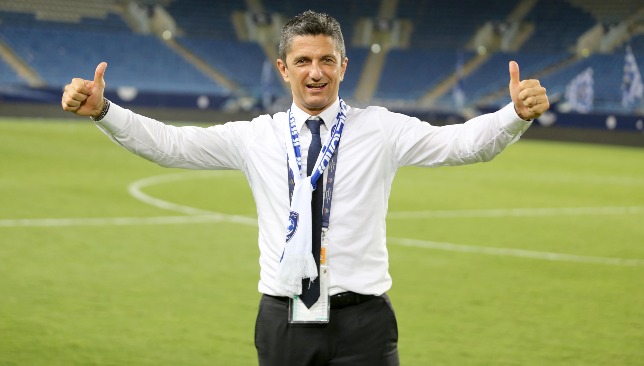 The Romanian was poached by Al Hilal after he guided PAOK to their first Superleague Greece title in 34 years, becoming the only side since 1964 to do it without tasting defeat. He then followed this up by guiding his new employers to a cherished first AFC Champions League-success in 19 years and then, deservedly, adding the SPL trophy to his burgeoning collection with a record points total of 72.

Expert squad management in a hectic winter was required to pull off this feat. Hilal also outscored Nassr by 14 goals and conceded the same amount as their nearest opponent, while a leading average possession of 62.7 per cent exemplifies the consummate level of control.

Noureddine Zekri and Yannick Ferrera performed miracles by keeping their employers in the division. Vladan Milojevic – just about – tamed the untameable to qualify Ahli for Asian football, while Besnik Hasi deserves immense credit for pushing Al Raed up to sixth.

None of these achievements, however, match the all-encompassing brilliance of Lucescu. 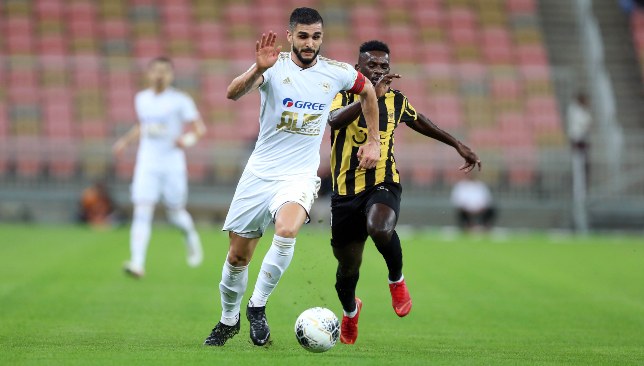 Igor Rossi was a beacon of strength at the back for fifth-placed Al Faisaly.

Their Brazilian defender’s statistics showcase his valour, leading the way with 230 SPL interceptions and 25 shots blocked.

Faisaly would not have recorded the joint-third meanest defensive record without such gallant efforts. 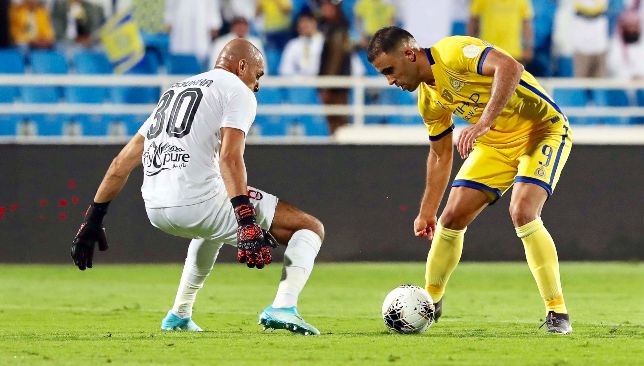 Al Raed, ultimately, came up short in their quest to earn a first shot at Asian football.

A significant factor in their remarkable campaign was the form of Azzedine Doukha. The busy Algeria international made the most penalty saves (four), fifth-most saves (92), second-most high claims (18) and joint-most charges off his line (66).

His clean-sheet tally, though, was half that of Nassr’s leading Jones (12) and three less than Hilal’s Abdullah Al Mayouf. These two would, usually, be the leading contenders for the goalkeeper prize. 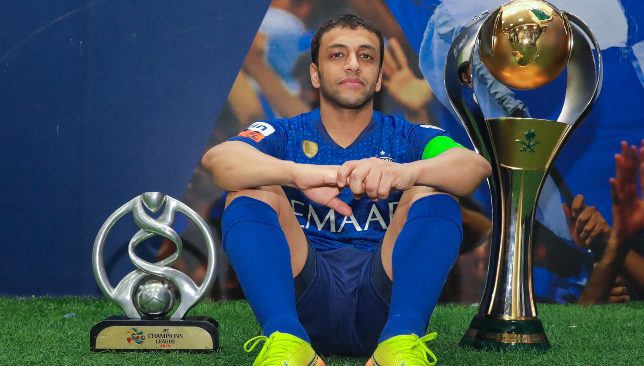 Goodbye, when it arrived, was typically unpretentious.

A, final, few kick-ups on the King Saud University Stadium turf and then led away by his daughters. This touching video on social media was the perfect way to bring the curtain down on one of Asian football’s great careers.

The extent of Mohammad Al Shalhoub’s service to Al Hilal throughout 22 years, and 33 trophy lifts, in the first team is hard to quantify in words.

But this last-day appearance during injury time in the 2-1 defeat of Al Shabab represented just a fifth SPL run-out of 2019/20, accounting for 13 minutes.

“He will renew and by God, we cannot do without him,” were the effusive words of praise issued by centre-back Ali Al Bulaihi when he gate-crashed his 39-year-old team-mate’s post-match Riyadiya TV interview before any announcement had been issued. Retirement had, however, been long initiated.

Al Shalhoub is small in stature, but became a giant for Hilal. He will be, sorely, missed.