The tributes and plaudits have been stacking up at a rapid pace ever since MS Dhoni announced his retirement from international cricket on the occasion of India’s 73rd Independence Day.

In customary style, the India stalwart announced his decision without much fanfare and away from the media glare via an Instagram post. Minutes later, another member of India’s 2011 World Cup winning squad joined him in the retirement club.

As if he was taking a cue from Dhoni, Suresh Raina too made his international cricket retirement official through the medium of social media. Naturally, all the spotlight since Saturday evening has been fixated on Dhoni instead of Raina.

After all, very few in Indian cricket’s history can match the stature of Dhoni while none come close to emulating his achievements as skipper of the national team. All the adulation might be going Dhoni’s way for now, but Raina is not the type to feel aggrieved or slighted by the lack of fanfare surrounding his retirement.

For the greater part of his career, the left-handed batsman lived in the shadows of MS Dhoni in both international and IPL cricket, and retirement should prove to be no different.

Much of what Dhoni’s tenure as India skipper embodied was also reflected in Raina. Both players broke the stereotypes of India’s international cricketers emerging from the larger metropolitan cities of Mumbai and Delhi.

Small-town kids with lofty ambitions, Dhoni and Raina played vital roles in India’s transformation into a more fitter and athletic side on the field. Dhoni’s lightning-like reflexes behind the stumps and extremely sharp glove-work became apparent pretty soon, but Raina’s electric abilities as a fielder in the inner circle were equally important in India’s rise as a limited-overs cricketing powerhouse.

As a supremely gifted athlete who could pull off the spectacular on a regular basis, Raina was Dhoni’s marshal on the outfield while the skipper conducted proceedings from behind the stumps.

Their running between the wickets in tandem when on the pitch was another sight to behold. Converting singles into doubles and twos into threes was truly an art form when Dhoni and Raina came together at the crease.

Two excellent runners between the wickets.

Dhoni’s greatest asset as India skipper was his ability to get the team to perform more than just the sum of its parts. As a captain, he could not have asked for a better player than Raina who was selfless to the very core.

The ultimate team-player and sidekick, Raina did the unglamorous job of scoring those quickfire 30s and 40s, while batting down the order.

A batting average of more than 35 while batting at No5 and 6 primarily is handy, though it is his strike-rate of 93.25 which made Raina’s contributions all the more invaluable. He was never one to bat for personal milestones and glory, with the team cause always taking greater precedence.

Perhaps it was to his own detriment in the end. His crucial cameos down the bat are often overshadowed by the achievements of other Indian batsmen like Dhoni, Yuvraj Singh and the legendary Sachin Tendulkar.

Dhoni’s six off Nuwan Kulasekara in the final of the 2011 World Cup will be the abiding memory of the tournament for Indian fans, though Raina was certainly one of the unsung heroes. Having been excluded from the playing XI for the group-stages, Raina came up clutch for India after he was drafted in for the knock-out rounds.

While Yuvraj Singh might have taken the spotlight in India’s quarter-final victory over Australia, Raina’s unbeaten 34 was vital in navigating a tricky target of 261. In the semi-final against arch-rivals Pakistan, Raina once again came up with the goods despite having to bat with the tail.

It was his unbeaten 36 that helped the hosts post a respectable total of 260 after a middle-order collapse had left India reeling at 205-6. If not for these two notable knocks from the southpaw, India might not have even qualified for the final in their own backyard.

As a gutsy batsman who provided much needed impetus to India’s batting order, Raina was worth more to India than mere statistics. Aside from being an excellent fielder, he could also be relied upon for his part-time off-spin with the ball.

Five tons and more than 5,600 ODI runs do not tell the full story of Raina’s importance to India’s fortunes. He was also the ideal player for the T20I format, with only Virat Kohli and Rohit Sharma eventually surpassing his run tally for India. 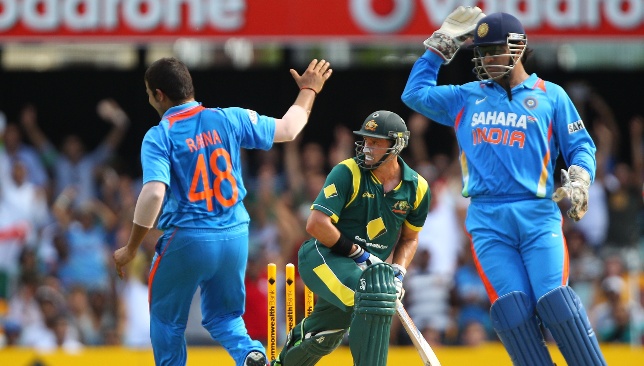 A handy part-time spinner as well.

Although his Test career never really took off despite a century on debut, Raina can still hold his head high as the first Indian batsman to register tons in all three formats. He might have had his vulnerabilities against the short-ball, but few batsmen played the lofted cover drive as well as the southpaw.

Dhoni’s retirement seemed inevitable at the age of 39, but Raina’s decision still comes as a slight shock given the fact that he is only 33. However, the writing did seem to be on the wall for the middle-order stalwart who has featured in only three ODIs for India since the start of 2016.

Dhoni’s trusted lieutenant and sidekick might not make the headlines even in his retirement, but the high praise that he has come in for from former team-mates and opponents alike speaks volumes of his impact.

His association with the former India skipper will continue at Chennai Super Kings for some more time to come, and none will be happier for that fact than Dhoni.