Wil Dasovich has addressed the Nas Daily controversy after being called out on Twitter for his statements that he said were taken out of context.

Dasovich went trending on the social media platform after he and his fellow vlogger and friend Nuseir Yassin, otherwise known as Nas Daily himself, had a friendly discussion on politics and influencers in the latter’s podcast on Spotify.

The Filipino-American vlogger was later slammed by netizens for apparently advocating “toxic positivity” and for choosing to stay away from politics when vlogging. He clarified in a new video, however, that this is “far from the truth.”

For one, Dasovich admitted that his “golden rule” quote – where he said he chooses to stay away from politics so as to not “upset a huge group of people” – can indeed look bad if taken out of context.

He also clarified that when Yassin disagreed with him at one point with the quote “When something major happens in your country, you will be forced to talk about it,” Yassin was not referring to the denial of ABS-CBN’s franchise renewal bid.

“When you look at these statements on Twitter in just font without hearing tone of voice, paired with tweets with their own political agenda, then this can alter the narrative and cause controversial chaos, which is, a lot of the time, seems to happen a lot on Twitter,” he explained.

After reading several tweets from Filipinos slamming him for being greedy and lauding Yassin for “canceling” and “exposing” Dasovich, Dasovich stressed that the discussion they had was fun and had no malice whatsoever.

“For someone who just chanced upon Twitter and didn’t listen to the podcast and just sees all these posts, it’s easy to assume Nas was scolding me or giving me a lecture, exposing me for being greedy as if this was some sort of hostile argument where he was telling that what I’m doing is wrong,” he explained.

“A few misplaced quotes out of context and your entire credibility, your character and your whole persona can be destroyed just like that,” Dasovich said.

Dasovich also stressed how people tend to leave out the part where he agreed with Yassin’s stance that content creators would not just go vlogging about video games when something big occurs, such as the Philippines going to war with China, for example.

“I agreed with that statement. But people leave that part out that I agreed with him. Instead, they follow it up with a statement I said earlier in the podcast about how I try and not talk about politics on social media,” Dasovich said. “That’s essentially how this whole controversy was created.”

He added that he does not talk about politics for the “very reason that people can use what you say and spin it for their own political ambitions and self-interests.”

Yassin meanwhile shared the same sentiments with his friend, noting on Facebook on July 18 that Dasovich’s statements were taken out of context and urged people to listen to the podcast itself.

“Recently, I announced an episode of my new podcast “Nas Talks” with Wil Dasovich. It was a very fun episode. But sadly, it’s being taken out of context in some online articles, and it pains me to see that,” Yassin said.

“Wil and I are good friends. The podcast was very friendly. But when you write it down in text or an article, it looks like it was all serious and grumpy. It wasn’t,” he added. 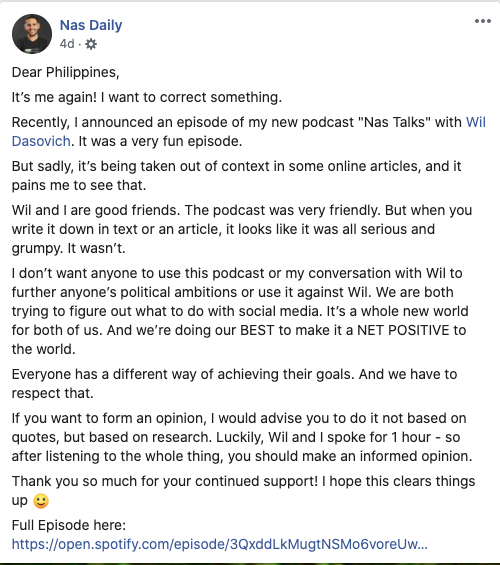 In his vlog, Dasovich also opened up that he would like for ABS-CBN to still be running “for the thousands of unemployed, for friends and family of mine who currently work for the network.”

“And to be honest, even for my own personal interest, I wish it was running for myself because I work with ABS-CBN and I love the people who I work with,” Dasovich noted.

Dasovich admitted that he rarely intertwines vlogging and politics on his YouTube channel “because that’s not the type of content that people come here for.”

“But I do understand that I have the responsibility to not just inform myself, but to help bring social change for those who do come here to watch my content,” he said.

After also pointing out that he makes content based on the feedback he gets, Dasovich challenged people “who are so eager to rush on to Twitter and just clip a quote” to do research and comment their opinion on the said vlog, saying he will listen and learn from them.

“If you want to make a real change, you won’t be able to do it through bullying someone into agreeing with you or trying to cancel them,” he said.

“Attacking someone that has never even harmed you is never gonna get them on your side. Difference should lead to discussion first way before division,” Dasovich added.

The YouTuber also noted that included under freedom of speech is “the right to not voice out your political beliefs to others.”

“This doesn’t mean that we don’t care or we’re not affected. It just means that discussing politics on social media is pure chaos and it’s inviting a lot of malicious individuals into your life,” he stressed.

He also acknowledged that he holds “certain privileges” and hopes in the future to make a better effort in educating himself so he can reciprocate it to his viewers. JB

Enchong Dee on urging other artists to speak up: ‘Our voice is not for us’