Cast members of the Philippine remake of “Descendants of the Sun” (Image: Instagram/@mercadojenny)

The Philippine remake of the Korean drama series “Descendants of the Sun” has been recognized as the Most Popular Foreign Drama of the Year at the Seoul International Drama Awards.

GMA shared the achievement on Instagram yesterday, Aug. 10, alongside a poster of its stars Dingdong Dantes, Jennylyn Mercado, Jasmine Curtis-Smith and Rocco Nacino.

Dantes later spoke about the win on his own page and thanked the show’s crew as well.

“A proud member of Team DOTS here!” he said. “Congratulations to the men and women behind the show!”

His co-star Mercado also expressed her gratitude for the award while thanking the show’s fans.

SINGAPORE — Movie fans who were looking forward to watching Mulan on the big screen would have been deeply disappointed after Disney announced last Tuesday (Aug 4) the blockbuster movie would not be shown in cinemas in most countries.

The entertainment giant said Mulan would instead premiere on streaming platform Disney+ in September after its cinematic release had been delayed several times since March because of the coronavirus pandemic.

However, an independent cinema owner in France took his disappointment and frustration one step further over Disney’s move.

In a video posted on Twitter and which went viral later, Mr Gerard Lemoine was seen using a baseball bat and smashing the pop-up promotional poster of Mulan.

In an interview with Hollywood trade publication Deadline, he said he had been promoting Mulan for months and was hoping the movie would provide a boost for his cinema which, like many cinemas around the world, has been dealing with a falling number of cinemagoers due to the pandemic.

“It’s really a huge effort to stay open right now for most of us, but we were assuming there would be some ambitious movie releases in the coming weeks,” he was quoted by Deadline as saying. “By losing Mulan, we lost the possibility of offering our audiences a long-awaited film that would have helped us after these past hard weeks.”

Mr Lemoine said he was surprised by the overwhelming reactions to his video, which has attracted more than 1.9 million views

Argee Guerrero. Image: Screengrab from YouTube/I Belong to the Zoo

I Belong to the Zoo frontman Argee Guerrero revealed that he has tested positive for the coronavirus and has been quarantining in his home since July 26.

The musician disclosed his health condition to fans via Instagram Stories yesterday, Aug. 8. While he noted that he has contracted a mild case of COVID-19, Guerrero assured that “everything is slowly going back to normal” for him. 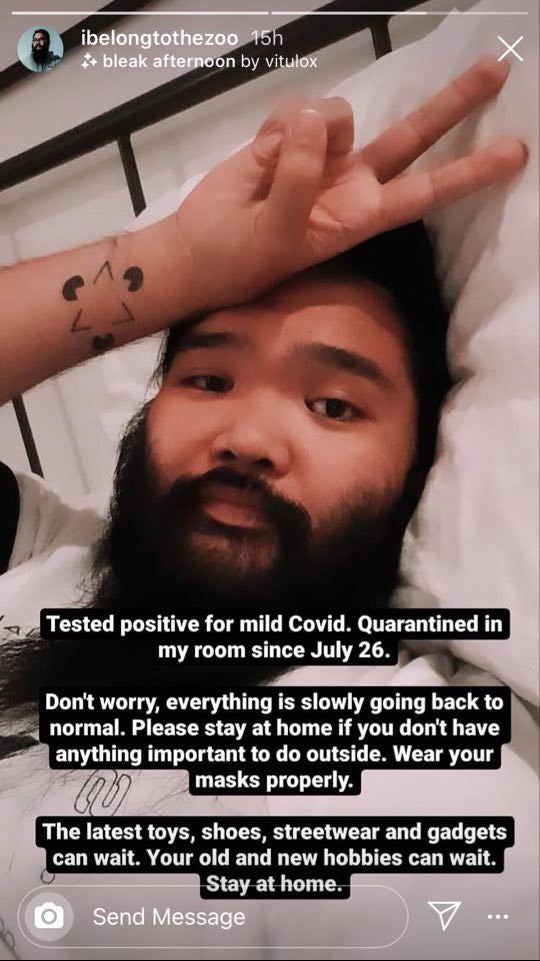 He then urged his followers to continue staying at home if they have nothing important to do outside and to wear their masks properly.

“The latest toys, shoes, streetwear and gadgets can wait,” Guerrero added. “Your old and new hobbies can wait. Stay at home.”

Prior to his announcement, Guerrero has joined online shows with other musicians amid the ongoing quarantine brought by the spread of the coronavirus. The band’s latest performance was for the seventh anniversary of the independent music label Yellow Room Music Philippines which was livestreamed on Festival Mall Alabang’s Facebook page yesterday.

Though the show was shot inside the establishment, the music label stated on Instagram that it was a pre-recorded performance. The group did not disclose when exactly it was shot.

Some of I Belong to the Zoo’s most famous hits include “Sana”, “Balang Araw” and “Balita”. Guerrero is also well-known for collaborating with Moira Dela Torre on her 2019 song “Patawad, Paalam”. Guerrero worked with Dela Torre and her husband Jason Hernandez on the song’s words and music. NVG


For more information on